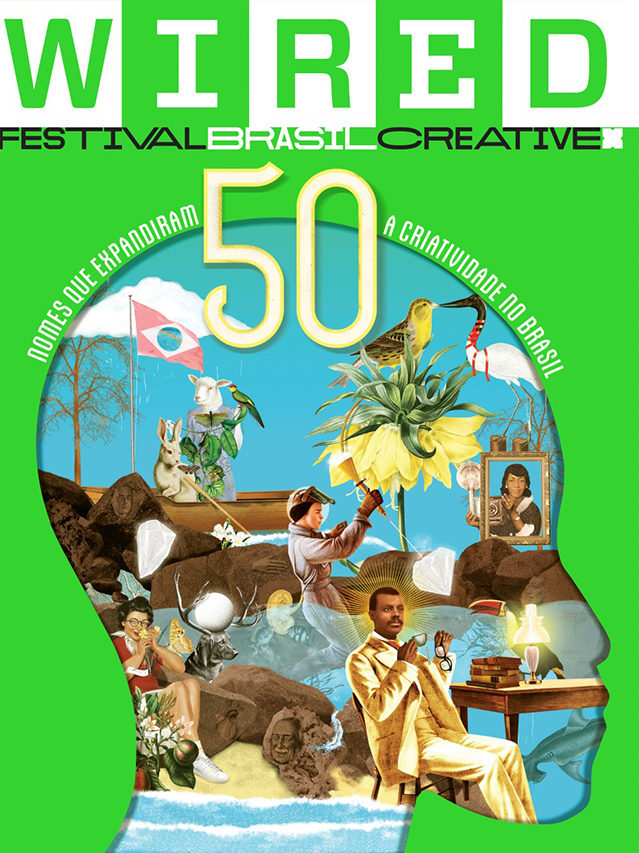 Laurindo Feliciano has been commissioned by Globe Condé Nast to illustrate the cover for the first edition of WIRED to come out in Brazil. Launched as part of the WIRED Festival Brazil, it celebrates 50 of the most influential people in Brazil ranging from the cultural to the scientific.

The task of illustrating the inaugural cover was not one that Laurindo took lightly, comparing it to “having a diamond to polish in my hands…” (an image he incorporated into the cover by the way!)

Given free reign to interpret the brief as he pleased, Laurindo knew from his experience of working with the British edition of WIRED that he was free to go wild. Researching the list of 50 influential people; he found that it represented people working across different social causes, environmental solutions, anti-racial discrimination, gender equality and much more. Ultimately, Laurindo chose to focus on the creative mechanisms behind these peoples ideas and causes.

Initially drawing inspiration from the metaphorical cross sections of Fritz Kahn, the final image moves further into surrealist territory, with nods to Hieronymous Bosch; capturing the multiculturalism of Brazil.

“I loved the freedom of working with clients like them, and I diddn’t have to rework  images in my archives to achieve this result. I consider this one a highlight in my portfolio.”

Harry Goldhawk makes magic for the cover of The Crow Folk!